By The Cleaning Lady

We all know the phrase, “A cluttered desk is a cluttered mind.” But what if that has been wrong all along? Are messy people actually smarter? Can we let go of the stigma that slobs are dumb and lazy? There may be some scientific evidence to back that up.

Is it bad to have a messy house?

First, a little mental health disclaimer. There are many reasons people may be disorganized and have a cluttered environment. Mental health issues are one of those reasons. People who suffer from depression often feel too tired and overwhelmed to clean up.

Also, people with ADHD have trouble concentrated and completing tasks, making cleaning and organizing difficult. If your mess is stressing you out, it’s not a good thing. Consider these factors when evaluating your mess. A messy room can be a sign of deeper mental health issues if:

Also, if you think your clutter is making you sick, as in respiratory problems and sanitary issues, then you should seek help. Especially if it is affecting other members of your household. Clutter can contribute to poor air quality in your home.

Once you have ruled out mental health issues, the science is pretty clear. Messy people tend to be more creative which is a common trait among genius people.

Over 100 actionable items to help you deep clean like a pro! Now with a FREE printable calendar to help you schedule your cleaning tasks.

Also according to the results of the Myers-Briggs personality test, people who describe themselves as disorganized almost always score high points in the character traits that identify the personality type as “Visionary”.

Why are geniuses messy?

It’s all about how the brain works. Geniuses tend to see the big picture instead of get bogged down in details. Highly intelligent people whose environments are disorganized tend to still know exactly where everything is and see no point in the time-wasting task of cleaning up.

They also tend to not care what anyone thinks of them and regard the status quo as boring. They are free to be adventurous and take risks.

So don’t take it from me. Let’s take a look at what history tells us.

Probably the most famous, and smartest, genius of our time, Einstein was notoriously messy. He famously said, “If a cluttered desk is a sign of a cluttered mind, then what are we to think of an empty desk?”

Considered by many “the father of American literature,” Mark Twain was no stranger to disorganization.

Edison was perhaps America’s greatest inventor. His inventions include the incandescent light bulb, the motion picture camera and the phonograph. He was also a notoriously messy person.

The genius behind Apple computers, among many other things, was a messy guy. This is him in his home office. Interestingly, his work office is still perfectly in tact on the 4th floor of the Apple Headquarters but no pictures have ever been available to the public. I wonder why?

Finding a healthy balance of order and chaos

I’m not saying by throwing all of your papers everywhere you will become a genius. It doesn’t work like that. But I will say that being obsessed with order and cleanliness may be taking a toll on your creativity. On the other hand, if you have that million dollar idea and you can’t find a pen to write it down, that is a hindrance too. Concentrate on finding a happy medium between order and chaos and you may just stubble upon some brilliant ideas. 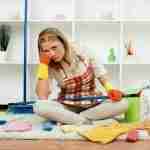 How To Keep Your House Clean With ADHD 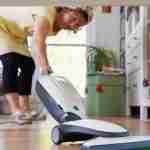 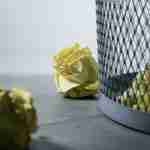 Why You Should Have Wastebaskets In Every Room Of Your House 5 Steps to Moving While Pursuing Entrepreneurship